After months of planning and planning and planning, the morning of departure greets us at 5am.  We roll out of bed complete with excitement and apprehension, but with the knowledge that we have the ability, information and equipment we need to be successful.  Everything is packed, tested and ready to go.  All we have to do is load and go.

Oh, but why’s the light switch in the kitchen not working and why is the refrigerator not on?  Crap! on to trouble shooting, reset the breaker all seems ok.  But we have never tripped a breaker, ever.  What’s going on… can’t have the refer dying while we’re gone.

Brian, Cyndy’s brother, arrives to give a ride to Ione and he also happens to be an electrician.  While he’s in the kitchen, boom!!, the kind you get with a dead short, it takes the circuits out again.  Two hours later we find the problem… I turned on a breaker in the generator panel last night that shouldn’t have been on… dead short to ground. Two hours delayed.

Get out to the yard to load bikes in the truck, it needs fuel, plug in the pump, snap, another short and more sparks, strike two.

We finally head off around 9:15.  The plan was to start in Ione, but with our late start we updated our plan and left from Plymouth.  This doesn’t give us too much of a distance advantage but will take us off the busy roads around Jackson in the middle of the day.

Get to our drop point and pull into the parking 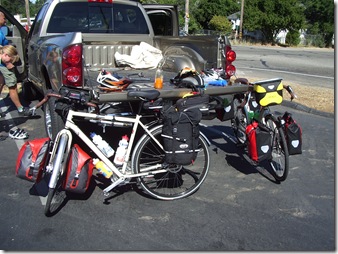 lot of a local breakfast place and start unloading equipment and setting up bikes. It’s a beautiful day with bright blue skies and light wind.  Just out of the parking lot our first road looks quiet and rural.  As the last item on our check list we bring our tire pressure up to full rated pressure. While pumping up Cyndy’s tires, psssttttt, I break the valve off her front tire tube, strike three.  Irritated, you betcha. 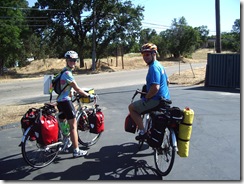 Now all we had to occupy our thoughts was the ride.  Things like; Wow that hill looks big and my bike is heavy or what were we thinking of when we decided to do this? We continued through rolling grasslands that quickly gave way to more and more forest.  The canopy provided welcomed shade from the midday sun.

Fiddletown turned into Shake Ridge Rd. were Brian, who had been following us, finally had enough, said his goodbyes and headed back to the valley.  We continued on with the thoughts of our connection to salvation being cut as we wound through the thickening forest.  Shake ridge turned to 88 and we continued our climb into the Sierra Mountains. At this point Steve was having a lot of trouble with leg cramps and Cyndy lead, having to stop from time to time to let Steve catch up.  Another small issue was forehead sweat.  Kind of a goofy issue we know, but as sweat rolled down Steve’s brow it would carry sun block and salt into his eyes.  The stinging forcing him to stop several times to deal with the blindness.

Just a few miles after joining 88 we stopped at Cooks Station for lunch, nothing fancy but it was welcomed.  Got back on the bikes and pressed on.  Steve had set the intersection of Mormon Immigrant Trail and 88 as our first stopping point, a little wild land camping in the forest on the side of the road.  Cyndy would have none of that, so we pressed on to Silver Lake Campground.  As we passed the planned stopping point Steve had had enough but we kept climbing. 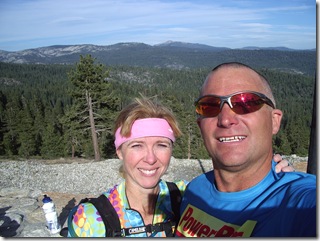 Later we summited near Maidens Grave while the sun was dancing on the western horizon.  Now it was time to enjoy a 4-5 mile descent, what a pleasure it was to cover these miles in just a few short minutes.  By the time we arrived at Silver Lake, the evening air had cooled us erasing any desire to jump in the lake.  Now we were more interested in setting up camp and settling in for the night.

We dawdled around the dam for a while looking for the campground, then finally asked directions.  The camp was just around the corner where Steve searched around a bit, only to find it full.  Some folks from Davis (next town over from where we live), who were also bike enthusiasts, saw Steve looking around and having a spot with plenty of room, graciously allowed us to stay.  They were very generous with camp resources as well and nice to spend a very short evening with.  Off to bed.

With the late start we arrived at 8:15, 10 hours on the bike.  It was a very demanding first day, 54 miles and more than 9000 ft of climbing, without Cyndy I would have stopped well short of this place.

Things that I am grateful for today: the support, well-wishes, and love from our friends & family; wide shoulders on the road; gracious drivers; a healthy body & the "turtle" mindset (just keep swimming…)

I never in my wildest dreams would think that I would be doing this!  I will never look at Kirkwood the same when we go up there to ski or hike.  Although we had plenty of time on the road, couldn’t really enjoy the scenery given the death grip I had on the handlebars (had to "shake it off" a few times & I might need to wash my mouth out with soap due to what words popped out a few times as the white line disappeared or an especially loud truck passed).  The mantra STAY RELAXED but ATTACHED to the bike handlebars has come in handy.  Most of the cars travelling up the hill had bikes, heading up for the Death Ride, so they were generous.

To those who have given me grief, yes, I did take some extra snacks out of the pannier to cut the entire load (bike, clothes and food) to 77 pounds.  Why didn’t I actually use the weights at the gym before this trip?

All-in-all, a successful first day despite the challenges, I actually made it up the hills before Steve :)  It was difficult to say goodbye to Brian as our link to home drove away, but a beautiful blue sky day & peaceful night was enjoyed.